Written in PHP7, Phở Kernel is a programmable interface, as well as a configuration, events broker for distributed micro social graphs.

Phở Kernel is not static, which means you can run multiple kernel instances in a thread, and you can halt and reboot each thread as many times as needed.

Here is a sample bootstrap script for pho-kernel:

Phở Kernel allows you to launch and manage social graphs. Just like any other graph, social graphs are also formed by "nodes" and their relationships identified by "edges".

In Phở's GAO model, a social network cconsists of three type of entities: Each of these types have their own particular characteristics which we will discuss in the chapters 5, 6 and 7.

Both edges and nodes are "entities" and they're represented in the database with a cryptographically secure unique identifier in the form of: "4a406464850849e9b13ac38d0a67c157". For more information on Pho IDs, check out section 9.

The figures below illustrate a mini social network, inspired by the movie Matrix where nodes are represented by: 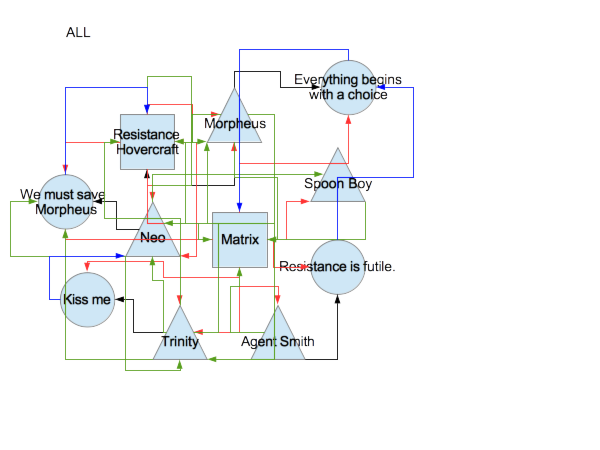 and edges by arrows.

This is what the figure looks like with the Actor/Write edges:

And this is what it looks like with the Actor/Subscribe edges:

This tiny social network consists of:

The examples above should give you an idea about how Actor, Graph and Object nodes behave.

The list of all the configuration variables you can play with can be found in pho-microkernel's defaults.php file.

Kernel services are defined in pho-microkernel. You can access a service by calling $kernel->$service_name() where $service_name is the name of the service in lowercase. Currently standard services on Pho-Kernel are:

Once you create the kernel object, you need to boot it up with:

Or if you have a custom founder (based on a non-standard Actor object) and you're running the kernel for the first time, you should pass it here:

If this is not the first time the kernel is booted up, the argument will be ignored.

Once the kernel is booted up, you can query the outer and inner graphs as follows:

The outer graph, or "space" is a super-graph that has one and only one element, that is the graph.

To query a node, you just use the kernel's gs() method, which is similar to UNIX' filesystem. You must know the ID of the node.

To retrieve a node with the given id:

Similarly, you can retrieve an edge with its ID using $kernel->gs()->edge("edge-id")

You call a service with $kernel->$service_name where $service_name represents the service keyword in lower case. For more details, see Chapter 4.

To create a node in the graph, you just need to create the object by passing the kernel ($kernel) as its first argument. By default:

Graph contains objects that implement NodeInterface interface, such as Node and Subgraph, but not Edge.

Nodes (or Particles) have three sub-types:

Graphs contain other nodes. This is their one and only function. A social network itself is a Graph. We call it the "Network". Another typical type of Graph that most social networks have is Groups.

Actors can do three things;

In social network context, social network members are the Actors. To illustrate this, take the example of Facebook. Facebook itself is a Graph. The groups and friend lists on Facebook are also Graphs (micro graphs). And you, as a Facebook member or the pages you own are Actors, because they like (subscribe) and respond (write) objects.

Objects are what social networks are centered around. They are the fundamental units of sharing. A photo or status update can be examples of object. The only edge that originates from Objects is Edge, which does the exact opposite of Subscribe, e.g. sending Notifications.

An Edge (aka lines or arcs in graph theory) are used to represent the relationships between Nodes of a Graph. Therefore it is a fundamental unit graphs.

Pho IDs are immutable and come in the format of cryptographically secure, similarly to UUIDv4, though not the same.

Pho IDs are used to define all graph entities, e.g nodes and edges. It is 16 bytes (128 bits) long similar to UUID, but the first 8 bits are reserved to determine entity type, while the UUID variants are omitted. Hence, Pho ID provides 15 bytes and 8 bits of randomness.

Even at scale of billions of nodes and edges, the chances of collision is identical to zero.

You can generate a new ID with $id_object = ID::generate($entity), where $entity is any Pho entity, and fetch its string representation with PHP type-casting; (string) $id_object.

Entity headers will be as follows:

Notifications are the messages passed between notifiers and objects, or subscribers and their subscriptions. Notifications constitute a basic component of all social-enabled apps.

For more information, take a look at

to see how notifications works.

Notifications are called by the execute() method of the edges. Example: ObjectOut/Mention.php and ActorOut/Write.php

One of the best features of the Pho Kernel is that it is event-driven. Anytime a new node or edge is created, deleted, edited, a signal is emitted. If set, a listener object (a Callable) can process the signal in real-time.

Hooks allow developers to intercept certain functions that may benefit from hydration at higher-levels. Hydration takes place with persistent objects which, once deserialized, may lose some of their object associations.

To illustrate, when you persist a node object, its EdgeList object may turn into an array rather than a full-blown object, which would be hard and expensive to store. Then, in order to retrieve the edge list, you can use the IDs and tap into your database in separate calls, which would enhance the performance of your app. Lib-Graph's hooks come into play in such scenarios, because you can intercept these getter methods and inject value by leveraging the information stored in your database.

You can use hooks as follows:

Below you can see a full list of entities that support hooks and their keys.

Handlers are virtual methods in use by particles. Virtual methods are created to handle setters and getters in respect to edges and fields. There are four (4) types of handlers:

These adapters can be replaced, or more can be added using handler adapters via registerHandlerAdapter(string $handler_key, string $handler_class) function. For example:

Objects that implement the InjectableInterface and use the InjectableTrait are easily extensible, with a plug-in variable architecture.

In order to inject a variable to an injectable object, just use

Then, the $obj will be able to use the $booster object internally via:

The use Injectable is discouraged, as it may represent security holes if not used properly. But you can use it when you must. Currently the only class that implements it by default is AbstractEdge.

Due to this additional privilege (e.g. "manage"), Pho uses a hexadecimal system to manage privileges, in contrast to UNIX' octal.

Plus, in terms of privilege groups, Pho introduces an additional one, called "subscribers":

Again, similarly to UNIX, Pho also has "sticky-bit" which ensures the privileges of an entity (or object) can only be changed by its owner, and not by the admins.

One can change a node's privileges with this simple command:

where the parameter is (from left-to-right):

The permissions table is as follows;

Pho is designed in microservices architecture. This is a directory of Pho stack projects; it starts with foundational packages and goes up to the user-level.

In addition, there are several repositories that help the aforementioned ones:

Here is the steps to compile a recipe. The Web recipe (https://github.com/pho-recipes/Web) will be used which is also the recipe used for GraphJS.

Note: The repo of each pho-recipes contains .compiled directory which consists the latest compiled code.

For a full list of Phở Kernel classes and methods, refer to:

Any questions/comments? Please say below: